Getting their attention: The heart behind the badge 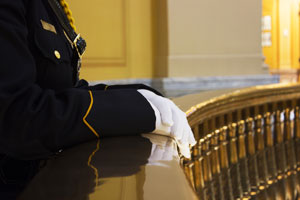 Los Angeles County Sheriff's Cmdr. Mike Parker wrote an eye opening letter depicting his 31 years on the job.  The letter shares Parker’s love of the job and the hardships a career in law enforcement can bring.  Parker says, “I have buried my friends and seen their children grieve, feeling lost and alone, yet surrounded by a sea of uniforms. I have seen the extreme cruelty that one human being can inflict on another and the incredible kindness of everyday people toward the less fortunate.”As stated in an recent interview with CBS News Cmdr. Parker said, “Those who work in law enforcement aren’t there for accolades”, the commander said.  “They’re just I think looking for a little understanding that we are human beings and we make mistakes and we are deeply flawed, but we’re willing to step into the arena and take on anything that comes our way, from danger to threats to broken hearts.Parker says,  “I really am grateful to all the men and the women who step up — and that I get to be one of them.” Aa a 30-year veteran in law enforcement Commander Parker has a strong understanding about the “Heart behind the Badge”.  Below is Parker’s letter in it’s entirety.

I am grateful to God for the privilege of serving I feel grateful to have served the public for 31 years with the Los Angeles County Sheriff’s Department.I have witnessed thousands of untold acts of bravery, compassion and pain of sheriff’s deputies and other peace officers.I have buried my friends and seen their children grieve, feeling lost and alone, yet surrounded by a sea of uniforms. I have seen the extreme cruelty that one human being can inflict on another and the incredible kindness of everyday people toward the less fortunate.I have heard mothers crying over their murdered children, and felt against my face many victims’ last breaths.I have seen a hand touching a shoulder and a few whispered words bring comfort to the weary. I have heard the elated shouts of parents as a deputy finds their missing child safe. I have smelled death so strong I could taste it. I have felt the depth of pain of my partners’ cold silence after seeing that which no human being should ever have to see, and then making the arrest without incident.I have shared the weight of society’s failures heaped upon the backs of peace officers, who endure it, and forge ahead with courageous hearts.If people could see what my eyes have seen, they would understand what the few do for so many. People would be so proud of these flawed yet extraordinary human beings who give so much hope and protection to the defenseless.To be a brother to such men and women is an honor few are permitted, and I am grateful to God for the privilege.I am so proud of my partners in law enforcement, and I plan to keep serving with the Los Angeles County Sheriff’s Department.– Mike Parker, Los Angeles County Sheriff’s DepartmentPosted in PubSecAlliance.com